We'd like to invite you to the Lofoten Islands again, this time in Feb 2016. We’re going to take you to the kingdom of incredible and enchanting snow covered mountains and Norwegian fiords which are covered by the finest glass of young ice in the morning. The main emphasis during our tour is going to be made on the morning and the evening filming, but our food of the day will be hunting for Aurora Borealis which is not even a bit less in March than in winter months. We'll see the Lofoten Islands at the moment of the greatest light show, the most wonderful and the most beautiful in the world. And the picturesque fiords, the virgin snow white beaches, the bright red fishermen rorbuers provide incredible photo opportunities during the whole growing longer spring daytime.

It was as far as 1120 when king Oisten built fishermen settlements with simple huts - rorbuers. “Bue” or “Boe” means a small temporary dwelling, and “Ror” adapting Norwegian can be rendered as “an exit to the sea”. That is, “rorbue” literally means a temporary dwelling for fishermen who would come to the Lofotens during the season. All the little houses belonged to the King of Norway up till the end of the 19th century. But sooner or later kings get into debts, and so the rorbues had to be sold to fishermen. At the same time barely nothing has changed in the ways of catching cod during the thousand years. Fishermen still have the same long-line kind of fishing, that is, they use a long piece of fishing line (about one kilometre) with a large number of hooks. But ships have become more powerful, there appeared freighters, trawlboats, the sales have brought in automation into the process. The old fishermen huts have been turned almost into hotels, with hot water supply, kitchens and electrical central heating. An important part of fishermen life is respecting the generations' traditions, so people are very conservative there. That was why trawlboats with huge fishing dippers haven't found their home on the islands, and still there are 500-600 fishing boats going out into the sea to throw the long fishing line down into the dark waters under the polar night sky. We'll see the Lofoten Islands at the moment of the greatest light show, the most wonderful and the most beautiful in the world. Aurora Borealis can be seen here even in cloudy weather. And the picturesque fiords, the virgin snow white beaches, the bright red fishermen rorbuers provide incredible photo opportunities during the whole growing longer spring daytime.

Mostly Beginner. Good mobility is required, but there will be no difficult climbing or hikes. However, you need to be able to walk on rocks and icy surfaces (with ice spikes or ice crampons), and to be able to withstand incoming waves and maintain stability, should you want to shoot in the water. Winter conditions in northern Norway can be harsh, and you must be prepared to withstand temperatues as low as -10 degrees centigrade in addition to strong winds, snow, hail or rain, but conditions are usually far better than one would expect.

Day 1
Meeting in Leknes Airport, Sunset Shoot The group will meet in the afternoon in the town of Leknes, where you can fly from Oslo in a comfortable morning flight. You will be picked up from the airport and driven to our hotel. After a quick introduction, we'll hop on our spacious van, leave our suitcases in the hotel and go straight to shoot the sunset in one of the spectacular beaches in the area (depends on arrival times). (//D)
Day 2-3
The Reine Area The Reine area is a paradise for winter photography, and a very typical Norwegian fishing area. Spectacular mountains such as the triangular Olstind and the towering Festhæltinden are accompanied by red and orange fishing cabins, to make up unique winter scenery. Reine looks amazing in any weather conditions, but snow can add a lot to the winter atmosphere, and make everything even more magical. If we're lucky, we might catch some golden sunrise light or even pink Alpenglow on the mountains. And with a bit more luck, we'll get a spectacular Aurora light show! (B//) 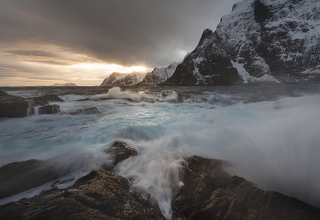 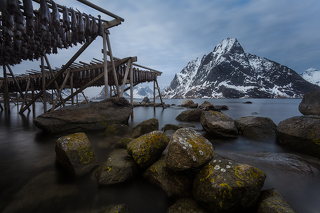 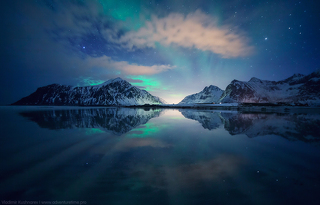 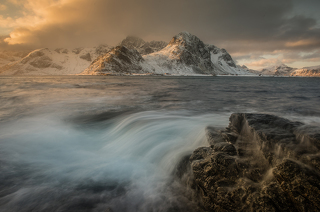 Day 4-5
Reine to Leknes: Nusfjord and more Another fantastic location between Reine and Leknes is Skagsanden beach. Skagsanden has a unique composition of black and white sand, and the streams flowing down the beach create spectacular textures. It also has hidden turquoise pools among incredibly photogenic rocks. Due to its moderate incline, Skagsanden is an amazing Aurora shooting location. The green lights reflect in the beach's black and white patterns and dance above the beautiful mount Hustind. (B//) 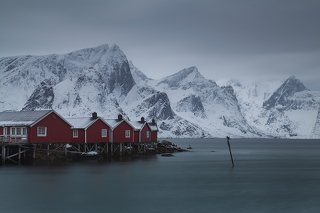 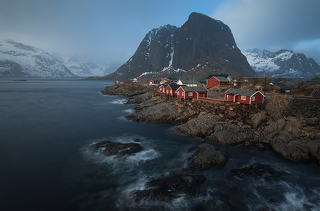 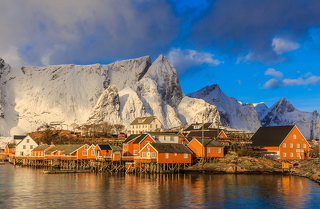 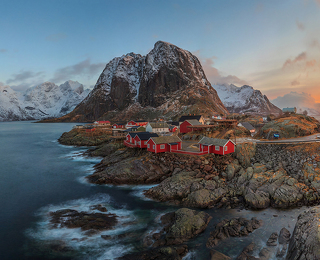 Day 6
Leknes Area Leknes is surrounded by wonderful shooting locations. Several beaches are world famous for their beauty. Utakleiv and Haukland might be the most known. Utakleiv is probably the most photographed beach in Norway, and for good reason. Amazing spherical rocks, red colors and of course, the curious 'eye'. Haukland is less known, but just as beautiful and diverse. These beaches are just 40 minutes away from our hotel and they are wonderful for Auroral shooting, so if the night is clear, we'll try our best to witness and shoot this spectacular phenomenon. 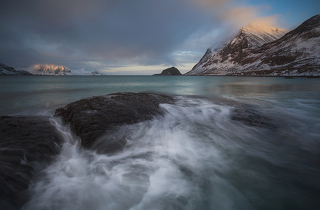 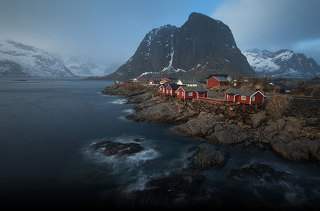 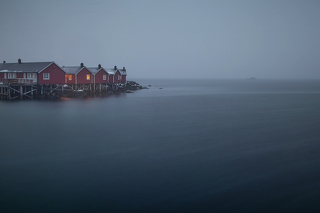 Day 7
Departure After breakfast at the hotel, we'll drive to the airport for goodbyes and your flight home. 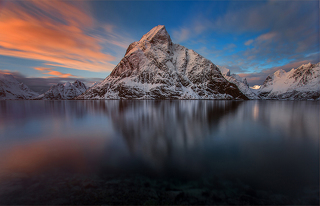 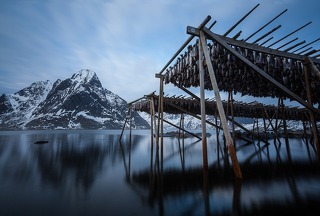 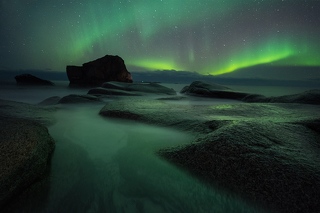 Included in the price:

- Double room accommodation. Each 2 participants will share a room in a comfortable Rorbue in the center Raine, where we will stay throughout the workshop for maximal comfort. Each Rorbue has small kitchen and dining room and 2 bedrooms or 4 bedrooms.
- Pickup and dropoff at Leknes airport (pickup at specified time, dropoff may vary according to group flight times).
- Dinner at day1 and breacfasts at days 2-7, please note that the organizers will provide all Breakfast foods and will cook the breacfast for the group. The full board meal is extraUSD300/per person.
- Professional photography guidance by an award-winning landscape photographer
- Post-processing workshop when possible (though emphasis is always on field shooting)
- Travels in spacious, comfortable vans
- Taxes on all services listed above

Not included in the price:

- Airfare to and from Leknes airport.
- Airport pickup and dropoff outside of agreed-upon times
- Winter clothing and winter gear. You're required to have all necessary gear, including thermal clothing, ice-spikes etc.
- Insurance. It is MANDATORY to insure yourself against physical injury, and highly recommended to insure your photo gear. Tour leader/s will not be responsible in case of any personal injuries or damage to photographic gear as a result of an accident during the workshop. A good insurance policy can make a big difference should something happen, and ensure a safe return home.
- Single room supplement (EURO650)
- Dinners and lunches (EURO300 per person)
- Alcoholic drinks Non-meal-time snacks Non-meal-time soft drinks

Gear:
- A digital camera, preferably a DSLR camera with a full-frame sensor, since these cameras have better low-light capabilities. However, a crop-sensor DSLR will also completely suffice. A compact camera can be used, as long as you understand its limitations.
- A sturdy tripod for shooting in windy conditions.
- Recommended: an ultra wide angle lens. For example, a Canon 17-40 on a FF sensor camera, or a Nikon 10-24 on a crop sensor camera.
- Recommended: a wide aperture ultra-wide angle such as the Samyang 14mm f/2.8 for night photography.
- Recommended: a telephoto zoom lens, such as a 70-200 or 70-300. Doesn't have to have a wide aperture or a stabilizer - an f/4 is more than enough.
- Recommended: A filter set for landscape photography. Espesially ND filters 4,6,10 stops. I personally use Lee, Heliopan and Singh-Ray filters. A good filter set is worth its weight in gold for a landscape enthousiast. If you need to consult about buying a filter set, I'll be happy to help.
- Recommended: A camera remote.
Wear:
- High rubber boots for the shooting at the cost or water
- Full thermal gear is essential. I typically wear a thick thermal base layer, a heavy fleece coat and a down coat.
- Good quality warm gloves. It's important to use gloves which enable you to operate the camera while wearing them.
- Thermal long-johns
- Water resistant trousers (preferably thermal)
- Thermal socks. I recommend bringing at least 2-3 pairs.
- A neck-warmer or a scarf
- A good warm hat which covers your ears.
- Highly recommended: thermal, water-proof, knee-high rubber boots (contact me for help).
- Ice spikes or ice crampons are MANDATORY to protect yourself from slipping on icy surfaces. You are obligated to obtain the spikes before arrival, and they need to be proper spikes (with metal triangles rather then springs or metal dots at the bottom).

Guide of the tour: